Last time I made sausage (brats), it seemed like my grinder was really loud and I saw some blue sparks. Worried me a little, so I picked up a new grinder as a later birthday present for myself. I went with the LEM Mighty Bite as I figured it fits our need. We only get about one deer a year, so anything bigger would be overkill. 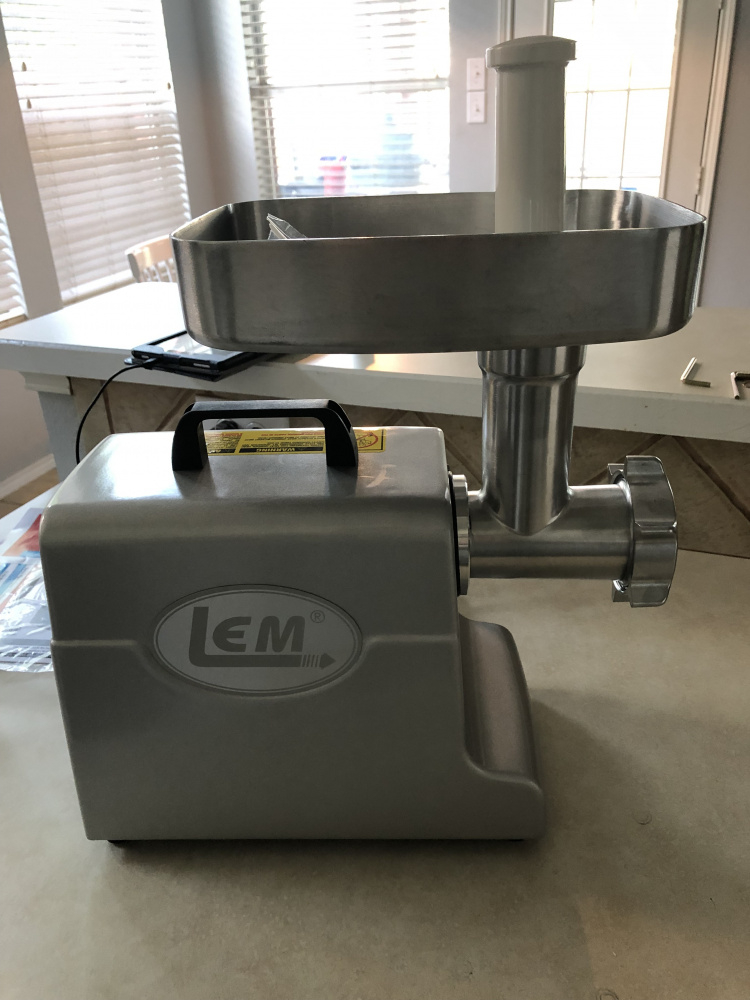 For this round of sausage, we started out with 5lbs of venison, 5lbs of pork butt, a pound of mild cheddar cheese (which I should have cubed up smaller) and 2 jalapenos (I wanted to do more, but Mrs. G was concerned about Duke) 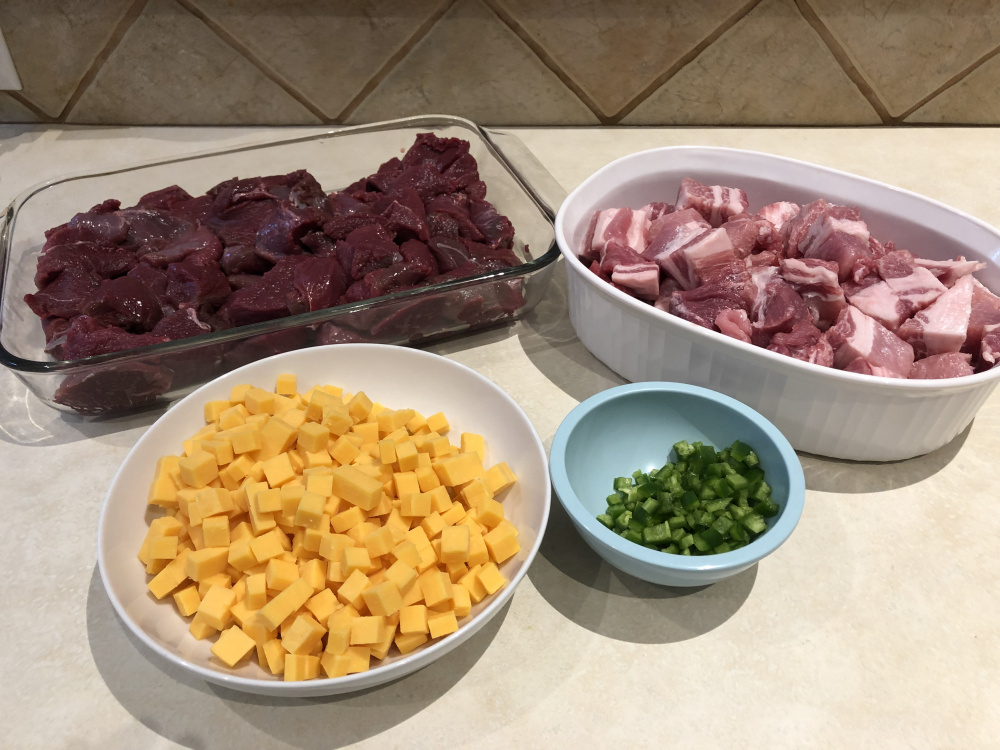 I was really impressed with the grinder. So much more quiet and it knocked out all 10lbs in 3 minutes. I know cuz I set a timer. 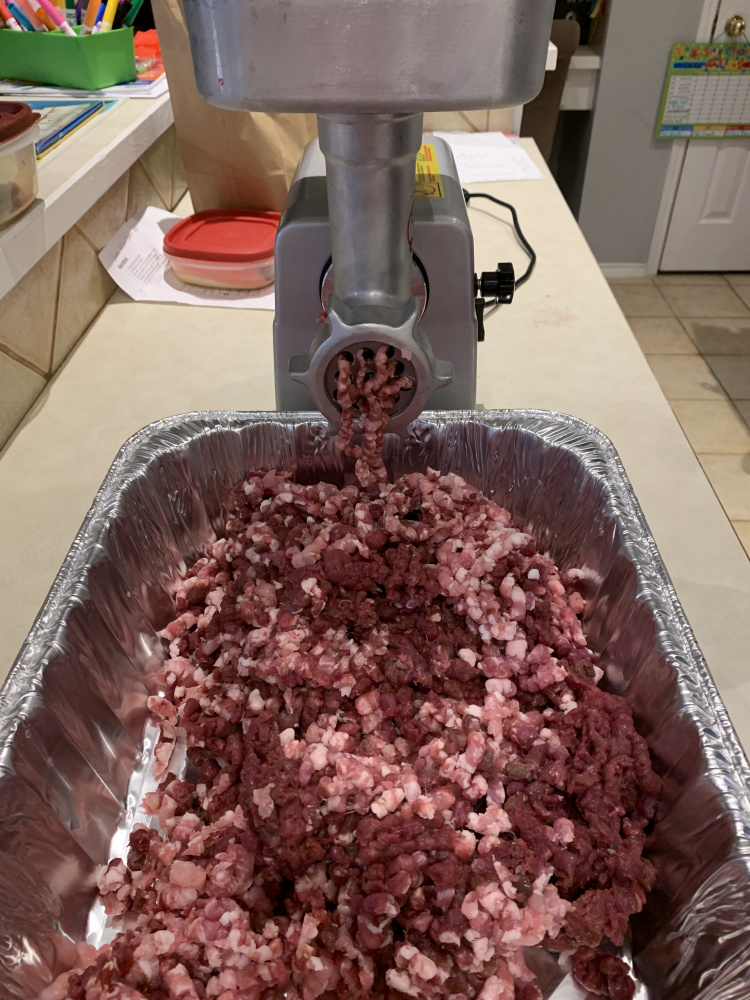 No pictures of the actual stuffing, but here it is going on the EGG at 140F (that’s the lowest temp the Flame Boss 100 will go) on three separate layers. 2nd to bottom layer and top layer on the Ceramic Grill Store Adjustable Rig and a 3rd layer on a home made layer with Weber grate and nuts and bolts. 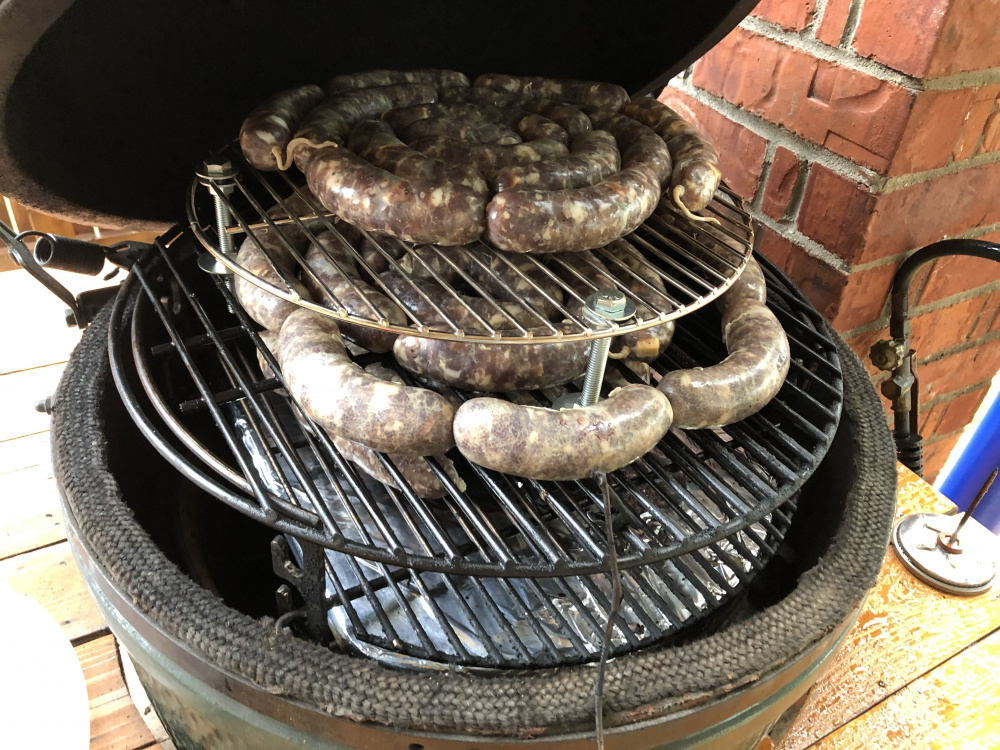 Here’s a pic that was about 4 hours in to what became a 7 hour smoke. 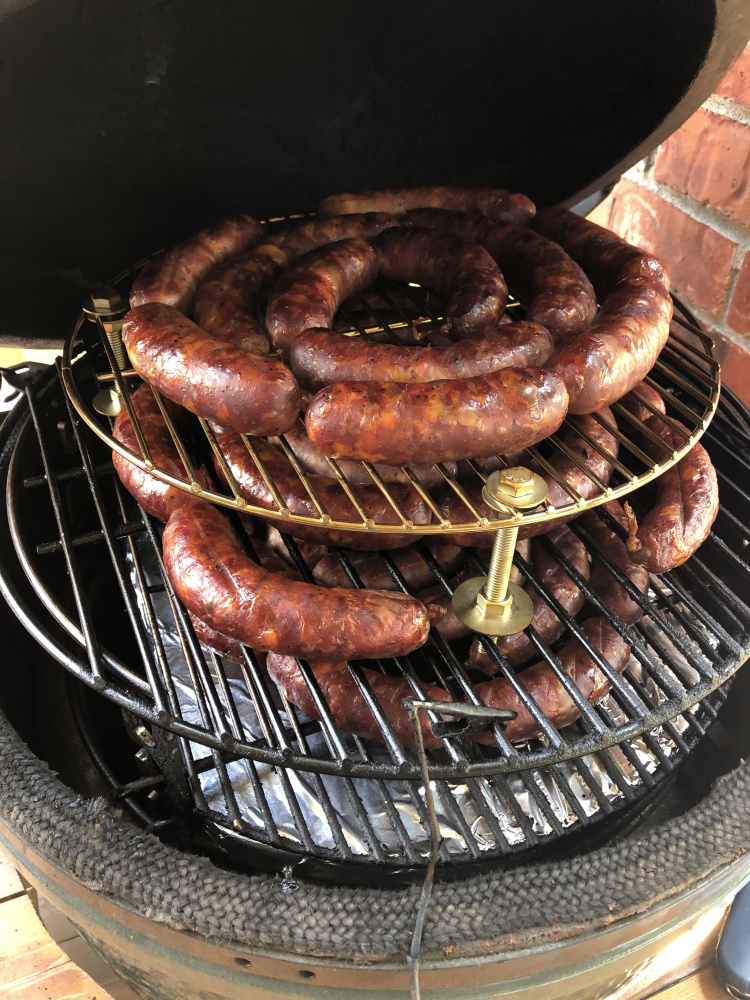 Final product after 7 hours and a short bath in some ice water. The temp kept creeping up on me even though the FB was set to 150 max during the whole run. Slowly went to 160, 170 and ended at 200F. It just did not want to stay where I had it set. That’s why you can see in some of the sausages that the cheese ended up melting. Yeah….I know there is high temp melt cheese, but I don’t like the way it tastes. 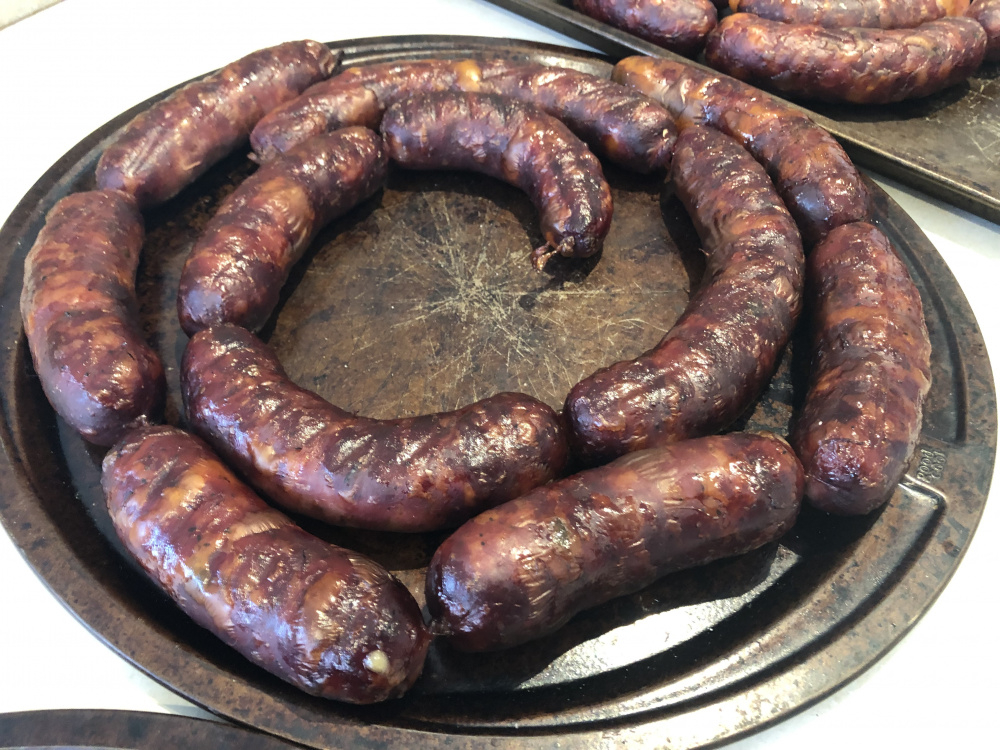 Broken up and vac sealed for later 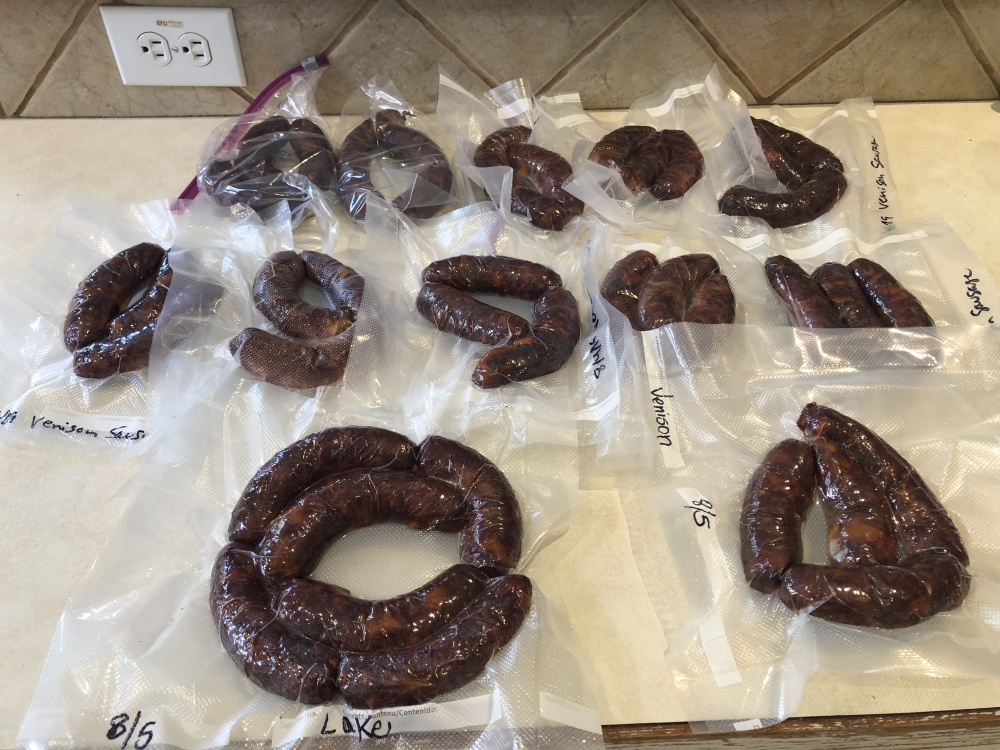 Here’s a pic later that night with dinner after I grilled some chicken breasts. Not the best picture as I’d had a few Wild Turkeys and it was kind of an after thought. “Hey, you should probably get some pictures of that!” 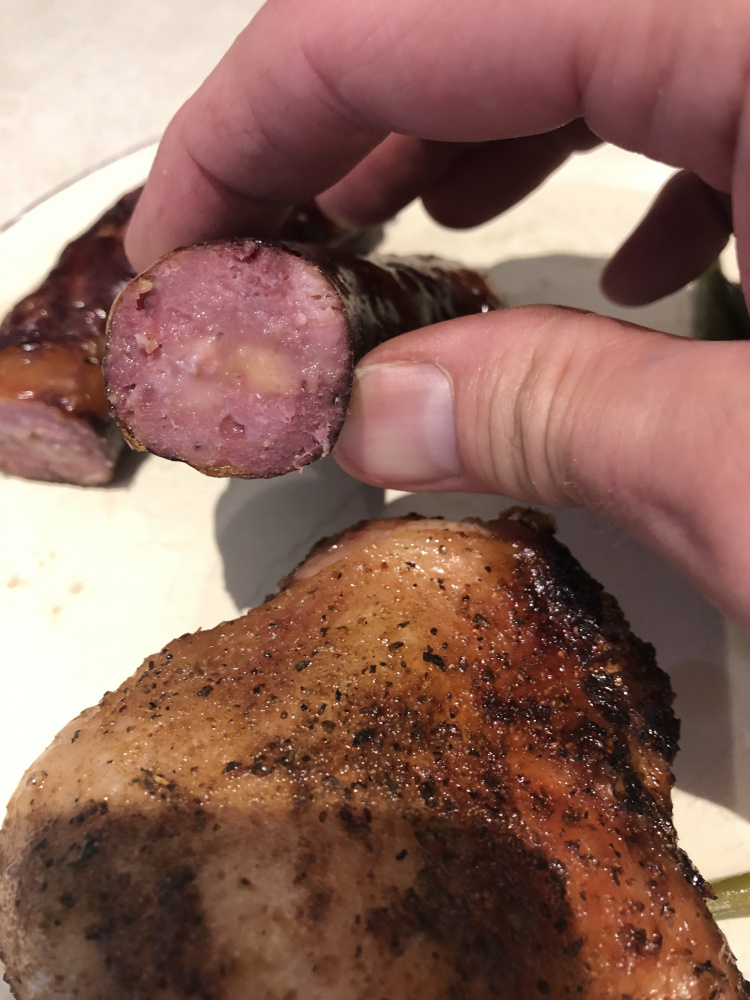 View all posts by griffinsgrub